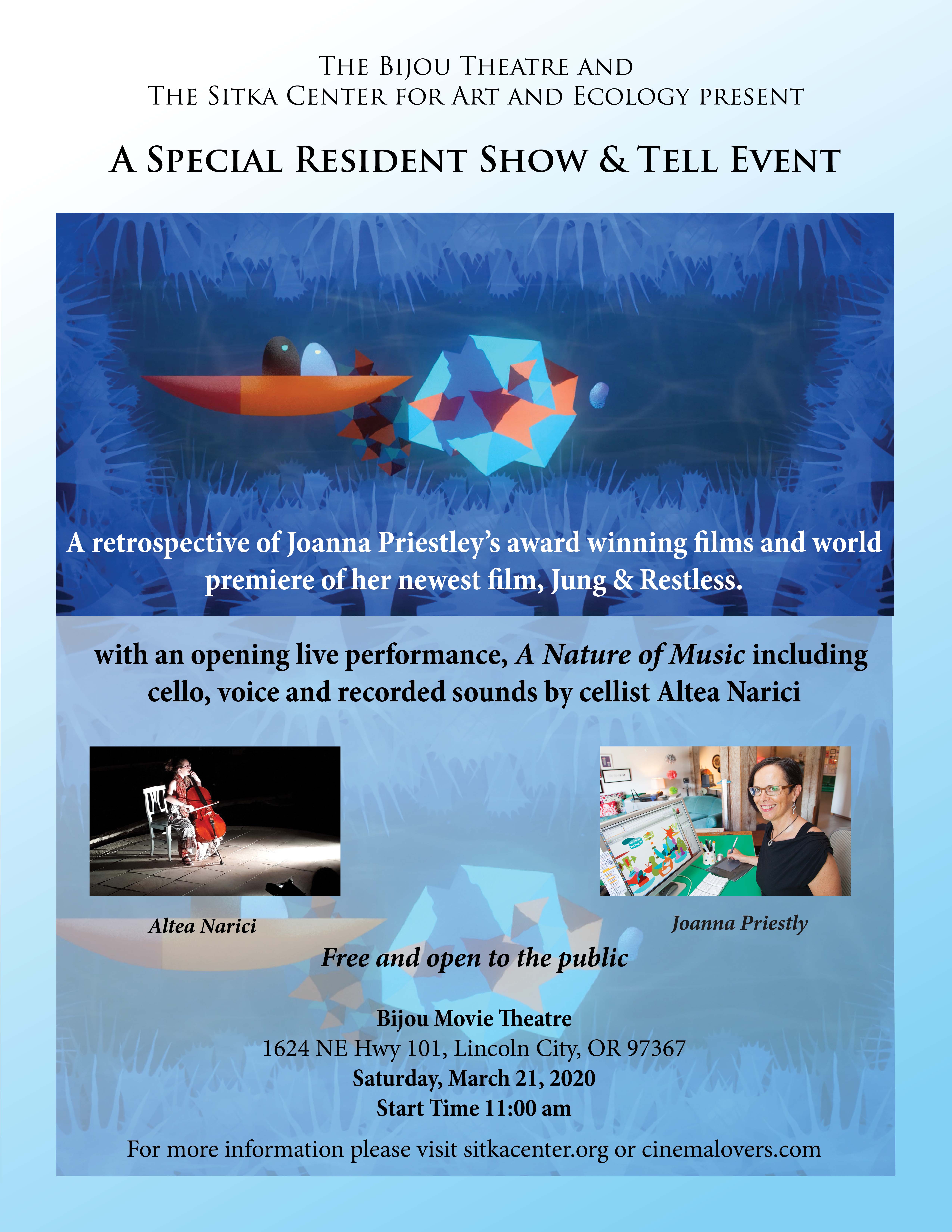 Free and Open to the Public

Altea Narici is traveling artist and performer from Italy. She creates songs as channels to connect with natural environments and ecosystems, and uses her voices to invent conversations across species and media.

At the moment she is especially inspired by salt water environments like marshes, estuaries, coastlines and open seas. Her work aims to be a focus to raise curiosity and interest for these ecosystems, and to bring inclusive creativity into conservation and outreach processes.

Altea is now traveling through North America for her Project “NewWorlds", supported by the FUP Friends of the International Yehudi Menuhin Foundation, to develop her artistic research and share it with the local communities through free-of-charge concerts and workshops.

Joanna Priestley: Short Films by the Queen of Independent Animation

Our program includes a retrospective of Priestley’s award winning narrative and humorous films, her popular abstract films and the world premiere of her newest film, Jung & Restless.

The films listed below will conclude with a short question and answer time. Run time 60 minutes

Voices (1985, 4 min., drawings on paper)
A humorous exploration of the fears we share: fear of the dark, of monsters, of aging, of being overweight and of human caused global destruction.

She-Bop (1988, 8 minutes, drawings and puppet animation)
She-Bop explores the dark, feminine side of spirituality. The central character in the film is a cartoon Kali, the Hindu Triple Goddess of creation, preservation and destruction. The animation is drawn on index cards with pen, watercolor and pastels and combined with a little puppet animation.

‍
All My Relations (1990, 5 min., drawings on paper with 3-D frames)
All My Relations satirizes the pitfalls of romance, from marriage, childbirth and upward mobility to the disintegration of a relationship. The animation is framed by a series of assemblages which emphasize the message implied by its archetypal characters whose dilemmas are familiar to those who have bought into the American Dream.

‍
Pro and Con (1993, 9 min., clay painting, cels, drawings on paper, object animation and puppets)
Pro and Con investigates life in prison through two monologues: one by a corrections officer (Lt. Janice Inman), and the other by Oregon State Penitentiary inmate, written by Jeff Green. Pro and Con features self-portraits that were drawn by inmates at the penitentiary and object animation of weapons and crafts that were confiscated from inmates.

‍
Utopia Parkway (1997, 5 min., drawings on paper, objects and replacement  animation).
Utopia Parkway is an abstract and symbolic film about covert forces and mysterious containers.  It was inspired by the boxes of American sculptor Joseph Cornell, who lived in the same house on Utopia Parkway in Queens, New York, nearly all of his life.

Dew Line (2005, 4.5 min., computer animation)
A rich abstract tapestry of biomorphic forms that hints at the loss of botanical diversity. The title refers to shapes created by condensation and to the line of radar stations (Distant Early Warning Line) built in Canada, Alaska Greenland and Iceland from 1954-57, during the Cold War.

Directed, produced and animated by Joanna Priestley. Sound designed and produced by Jaime Haggerty. Supported by a grant from the Regional Arts and Culture Council.

Directed, produced and animated by Joanna Priestley. Sound designed and produced by Seth Norman. Supported by the Regional Arts and Culture Council.
‍

Missed Aches (2009, 4 min., 2D computer animation)
A witty commentary on ignorance, idiocy and our over-reliance on spell check, this dirty ditty animates text and plays up phonetics with hilarious results. Written and narrated by Taylor Mali, who led teams to four championships in the National Poetry Slam.

Jung & Restless is beautiful and spectacular. The synchrony between the animation and the music and soundtrack is fabulous.” -Marcel Jean, Artistic Director, Annecy International Animation Festival

Learn first-hand from Sitka's artists and ecologists in residence about their creative processes and scientific research. These presentations held in the Boyden Studio, are opportunities for residents to share their work with the community. Light snacks and beverages are provided. Show and Tell is free and open to the public. Directions to Sitka Center.

Learn more about the current residents.