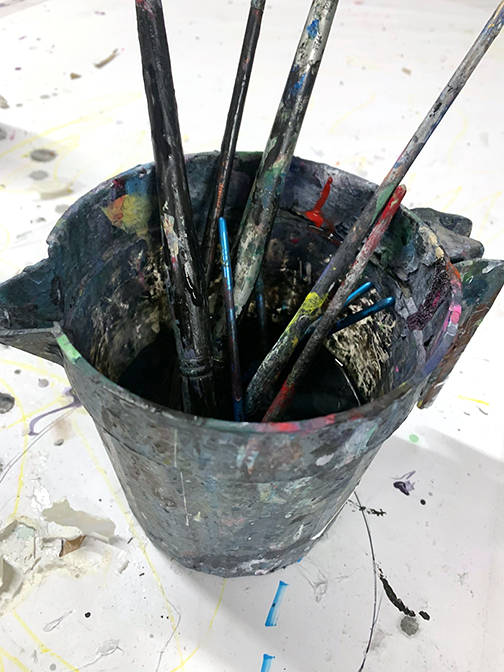 Kendra Larson is an artist based in Portland, OR with a primary focus on the ephemerality of Pacific NW landscapes. Her paintings and drawings explore historical ideas of the Landscape, Romanticism, environmentalism, and wonder evoked by the natural world. Larson’s current body of work makes visible fleeting qualities that add to our understanding of Place. These qualities such as smoke, fire, clouds, snow, movement, sound, and fireworks push the limits of painting. Originally from Salem, OR, she received her BFA from the Pacific NW College of Art and MFA in Painting from the University of Wisconsin, Madison. She has shown her work in venues in the United States and New Zealand. Larson is a past artist in resident of Sitka, Signal Fire, Caldera, and New Pacific Studios (Masterton, New Zealand). She is represented by Augen Gallery in Portland, OR, Shoebox Projects in Los Angeles, CA, and teaches at Portland State University and PNCA. Recently, she was awarded both a Regional Arts and Culture Council (RACC) Project Grant and Oregon Arts Commission Career Opportunity Grant. Larson hosts an art podcast with her sister called Art Gab (http://stumptowncreative.com/). When not painting she can be found hiking around Mt Tabor with her son, husband, and studio dog.

Over the last decade my work has touched on themes of Astronomy, Magical Realism, Feminism, and Phenomenology in Oregon. I explore the opposition of the subject to the medium such as fireworks being loud and fast while painting is quiet and still. With the pandemic, I have continued to create large scale paintings, sculptures, and drawings. My most recent body of work are small, intimate oil pastel drawings of fireworks and images of wildfires which further explore ephemerality, light, destruction, celebration, and the lusciousness of the medium. I’ve also been working on a small series of sculptures for a groups show in Seattle next March. The theme of the show is ‘human animals’ which I think fits well with my art practice since it evokes ideas of psychology and our, often playful, relationship with nature. Ultimately, my work renews childhood wonderment and calls on the viewer to protect natural spaces.ProcessA typical day in my life starts with my rambunctious five-year-old waking me up a bit too early. I get him ready and walk the seven blocks to his school and back. Then I’m able to get into my studio which is a converted garage behind my house near Mt Tabor in SE Portland. First, I take stock of the different works I have started and what needs attention. The next steps may be obvious or may need some time to sit and look. Last week my studio time was filled with the business of making art. I had my work photographed in the morning, then met and went to a fellow artist and friend’s exhibition and later finished developing a presentation to bring students on a European trip. Some days, I only have 30 minutes spurts to get as much done as possible. I enter the studio, get down a layer of wet paint covering the canvas and then come back in the house to make dinner. We eat and put my son to bed and I go back and pick up where I left off. I constantly adapt my process to my life and its circumstances. Whether drawing still-life’s along with my students through zoom, or crafting a goblin shark costume for my son, this practice informs my own work. During the wildfires, I focused my practice to pastels and interpreting the same image dozens of times in a variety of color palettes and techniques. This became somewhat of a meditation practice for me. At a time when I could not get into the studio as much, I began collaging my imagery in sketchbooks and later developed into large scale paintings. And recently, I revisited an older body of sculptures to re-work for an upcoming installation. The imagery and subjects I explore are often intuitively chosen, even though they all tend to orbit around environmentalism, Romanticism, and the Pacific NW. 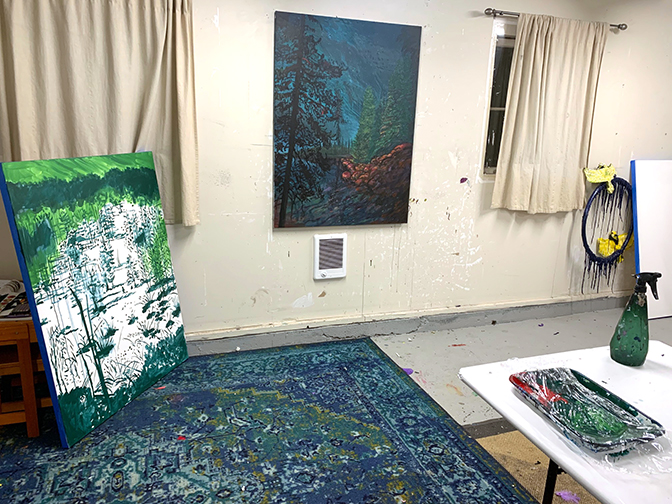 A few works in progress in the studio 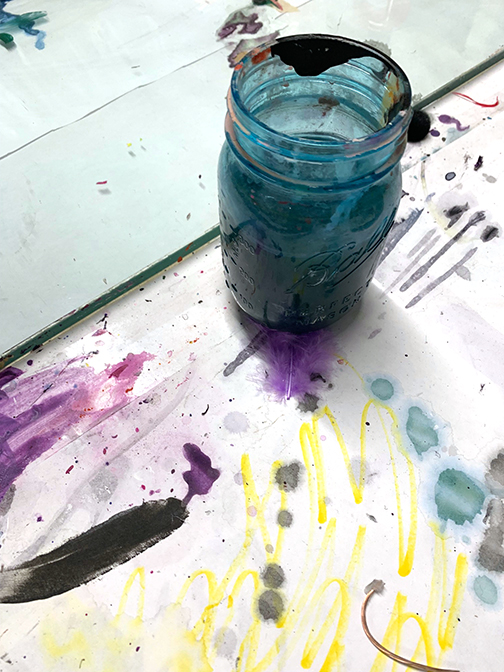 A cup of paint water on my worktable 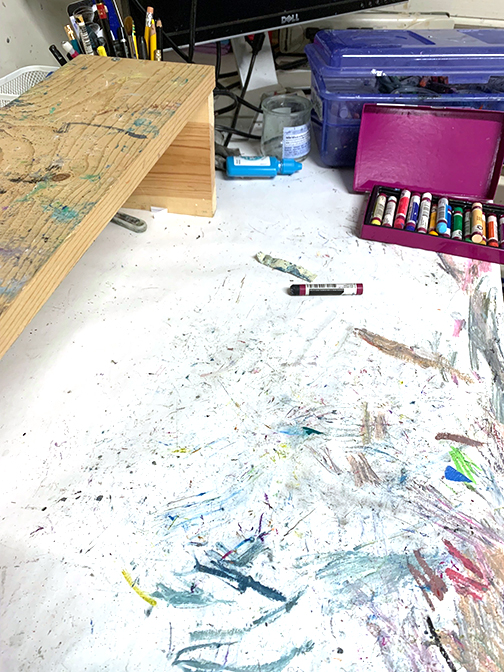 Oil pastel remains on my desk 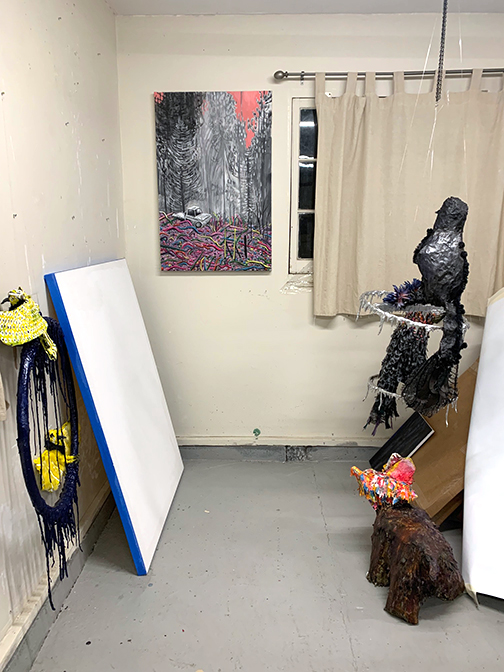 Some sculpture and paintings await an upcoming show

My paint water bucket that I still use after 15 years 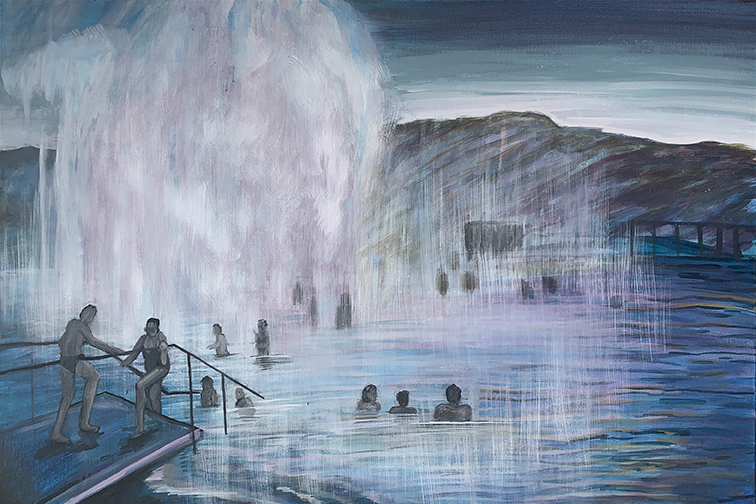 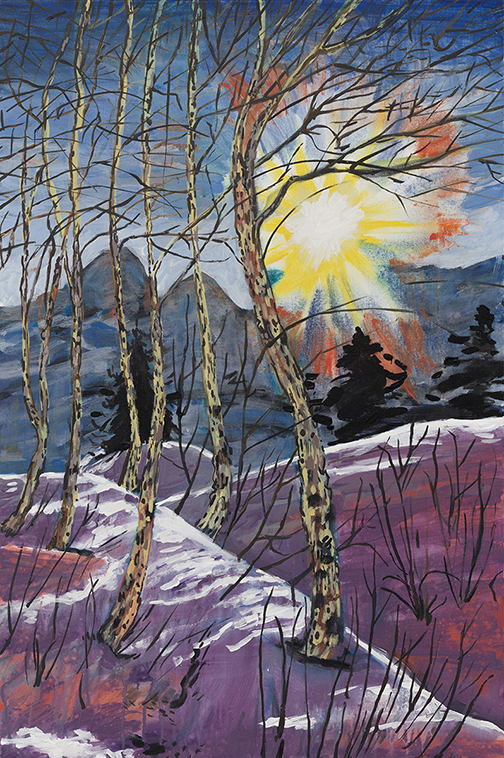 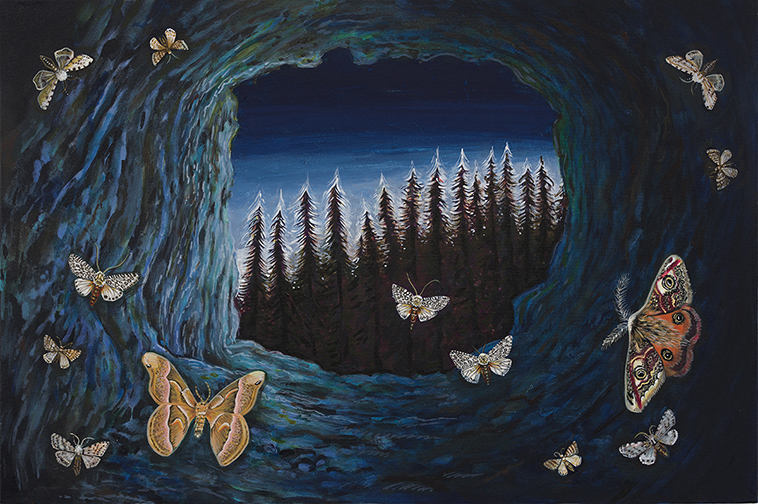 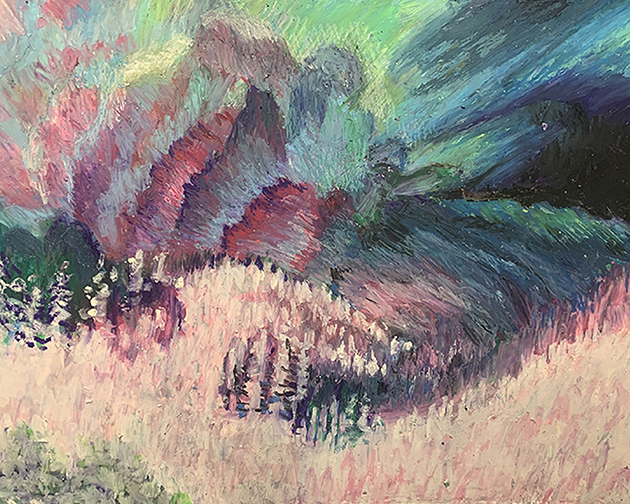 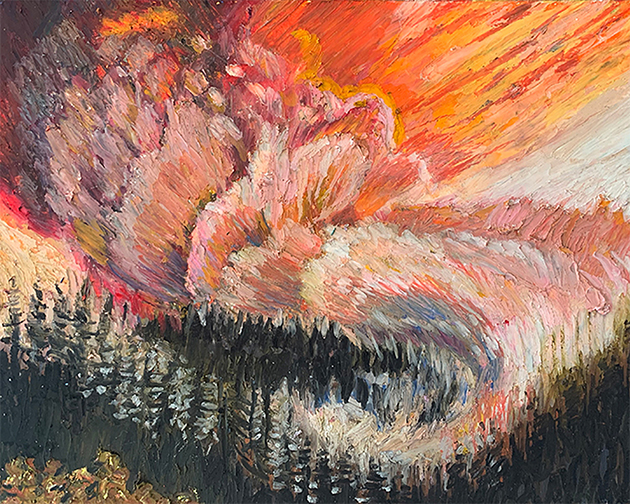