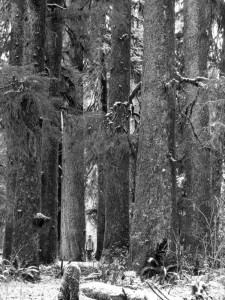 The Beaver on Crowley Creek

Why has she gnawed off

and just left them on the bank?

Maybe she’s been trapped out,

or swum away to another stream.

Or maybe those trees

she still has in mind.

for Frank and Jane Boyden

“The Douglas Squirrel …surpasses every other species in force of character, numbers, and extent of range, and in the amount of influence he brings to bear upon the health and distribution of the vast forests he inhabits. A King’s River Indian told me that they call him “Pillillooeet,” which, rapidly pronounced with the first syllable heavily accented, is not unlike the lusty exclamation he utters when excited.”John Muir, The Mountains of California

on each stair tread

on the far horizon

must be fishing boats.

on the bar at Coos Bay,

the skipper drowned. The coho run

is supposed to be up this year,

The wide beach is nearly empty,

just a pair of staggering lovers

and an old woman in rubber boots.

I watch a rivulet

spill from its pipe in the bluff,

fan out across the sand

or the nerves in a body,

a mock river flowing down to the shore.

on whatever life the trickle bears.

Alley-cats of the sand. Beach

Those pretty white spatters all over the parking lot

are their artwork. The one thing I can say for seagulls:

On the other hand, yesterday I was out on the jetty,

and a seagull jetted past me, cutting at sixty miles an hour

into the wind. How does it do that? Does it find some seam in the air

it can slide through without resistance? Can it do some kind of jiu-jitsu

that rolls the wind around its wings

to push it from behind?

is getting down to old donuts and shit on the sidewalk.

I have no idea where I’m going,

but if I could just

cut through this headwind,

I could get there faster.

Charles Goodrich is the author of three volumes of poems, Going to Seed: Dispatches from the Garden, Insects of South Corvallis, and, just out from Silverfish Review Press, A Scripture of Crows, and a collection of essays about nature, parenting, and building their house, The Practice of Home.