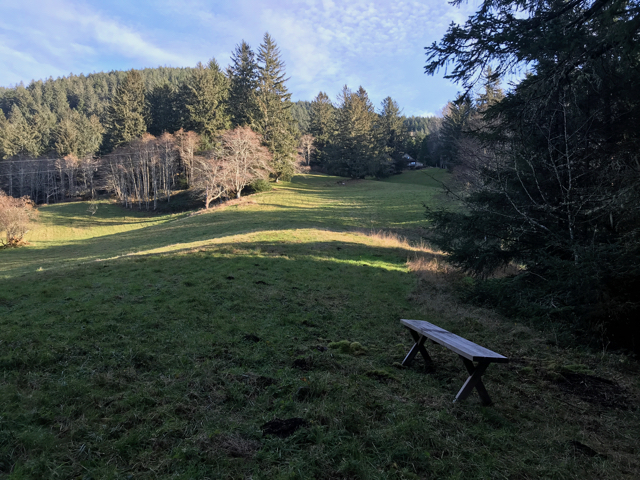 “I’m guessing you haven’t taken this path often,” Bob Langan correctly assumes. Lines from Robert Frost’s oft traveled poem hover in my thoughts as Sitka’s Facilities and Ecology Manager takes me out on a tour ofGrass Mountain. There’s something he wants to show me.

Bob leads me along the edge of a meadow which, to untrained eyes like mine that rely on the internet rather than the sky to predict the weather, looks like a natural feature of the landscape. 19th century poets and authors such as Longfellow and Thoreau helped perpetuate a myth among literature students like me that, prior to colonization, pre-Columbian NorthAmerica was a pristine wilderness. As we walk, Bob points out evidence of generations of anthropogenic footprints and a diversity of human aesthetics and priorities that have shaped and reshaped the land.

The First Peoples of Cascade Head used fire to convert patches of forest to prairie and attract elk herds for game. The Walls family, who homesteaded Grass Mountain for over 100 years, harvested timber, planted non-native crops and trees for agricultural purposes, mowed meadows and manufactured ponds for their enjoyment. Jane and Frank Boyden, Sitka’s co-founders, volunteered nearly a decade of their lives to remove debris and invasive species, clear paths and keep the forest from encroaching on the historically managed portion of the land, readying Grass Mountain for Sitka’s stewardship.

“Look at that!” Bob exclaims in a lowered voice, signaling for us to stop in our tracks. In a clearing up ahead, a mother black bear and two curious cubs are investigating the carcass of a recently deceased elk, lost to illness exacerbated by wet weather. We watch from a safe distance, crouched down, until the family disappears into the spruce canopy. “In all the time I’ve spent on Grass Mountain, this is my first daylight sighting of black bear,” Bob shares, wide-eyed. “That was really special.”

Our ultimate destination is another clearing to the south of the main meadow where Bob has made some of his own first thoughtful impacts on the land. Slash and low branches have been cleared from the periphery with an eye toward fire safety in a changing climate. Sight lines into the understory are opened and the borderline between what is manipulated and what is natural is visually blurred. A portable bench has been placed on the edge of domestication, facing into the forest.

Bob invites me to sit. “Why don’t I leave you here for a half hour while I go get some things done?” he encourages.

The year ahead will bring many opportunities to share more with you about Sitka’s future vision for Grass Mountain and first ways for theSitka community to get involved. Before the calendar turns, let me take Bob’s advice, pause and reflect.

Seated on this bench from which I can see the fields and farmhouse of those who came before and the forest home of the bears I met today, please join me in a moment of appreciation for all those who, with earnest intentions and to the best of their back-breaking abilities, labor to steward the land, achieve ecological balance and foster human awe for the natural world.

From the edge of wild,