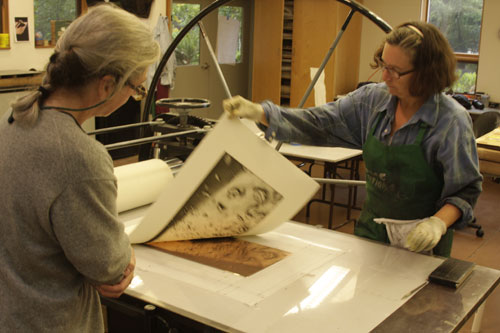 The annual Jordan Schnitzer Printmaking Residency was established to provide artists with little or no printmaking experience the opportunity to explore a new creative medium with guidance, from a master printmaker. Nine of these original residents are coming back to create another print alongside master printmaker Julia D'Amario and produce a special portfolio commemorating Sitka's 50th anniversary in 2020.

D'Amario worked at Pace Editions in New York City for seventeen years before moving to rural California in 2006. Julia first came to the Sitka Center as a resident artist in 1997. She developed a deep connection to Sitka and the Oregon coast and enthusiastically agreed to become involved in developing the print program. Jordan Schnitzer, one of Portland's most prominent print collectors, generously pledged his support for the project and has been funding it since its inception.

Baba Wagué Diakité is an artist, storyteller, author, and illustrator living in Portland, Oregon. He was born in Bamako, Mali and spent his early childhood in the village of Kassaro.  At night, he and his cousins would gather around the family fire waiting for grandma to share stories. These stories connected them to their surrounding nature, to their ancestors, and to the history of their village. Diakité arrived in the US in 1985 and began a career in art, creating colorful and lively paintings on pottery and hand building mythical ceramic creatures. In 2004 he founded the Ko-Falen cultural center in Bamako and returns to Mali annually to direct programs. He is the creator of numerous children's books, including the award-winning The Hunterman and the Crocodile.

Linda Hutchins is a visual artist whose work tests the limits of body, mind and self in a reappraisal of the meaning and experience of drawing. Beyond works on paper, her investigations have taken form as site-specific installations, wall drawings, cross-disciplinary collaborations, performances and custom drawing tools. Hutchins has been honored with two Individual Artist Fellowships from the Oregon Arts Commission, the Jurors' Award in the Tacoma Art Museum's 2009 Northwest Biennial, and a solo exhibition in Oregon's Governor's Office. Hutchins holds a BFA in Drawing from Pacific Northwest College of Art and a BSE in Computer Engineering from the University of Michigan. Before attending art school, she wrote operating system software for Intel Corporation. She lives and works in the Bowstring Truss House, a renovated warehouse in Portland, Oregon.

Larry Thomas's work is based in the natural landscape, primarily that of the northern California coast.  He taught drawing and printmaking for many years at the San Francisco Art Institute and served as dean of academic affairs and as interim president of the school prior to retiring in 2005.  Each summer for many years he has taught a drawing intensive workshop at Sitka Center and also has taught drawing at Haystack Mountain School of Crafts in Deer Isle, Maine.  His work is in numerous public and private collections regionally and nationally.  He currently lives and works in the small coastal town of Fort Bragg, Mendocino County, California.

Marie Watt is an American artist and citizen of the Seneca Nation residing in Portland, Oregon. Her work draws from history, biography, protofeminism, and Indigenous teachings. She explores the intersection of history, community and storytelling, and addresses how multi-generational and cross-disciplinary conversations create a lens for understanding connectedness to place, one another, and the universe.

Watt holds an MFA in Painting and Printmaking from Yale University, attended Willamette University and the Institute of American Indian Arts, and in 2016 was awarded an Honorary Doctorate from Willamette University. Among other residencies, she has attended the Skowhegan School of Painting and Sculpture; and received fellowships from the Joan Mitchell Foundation, the Anonymous Was a Woman Foundation and the Hallie Ford Family Foundation. Her work is in numerous museums nationally and internationally.

Heather Watkins' work explores the nature and possibilities of the drawn line-both concretely and poetically. From intimately-scaled embroideries, to large sculptural fiber installations-her practice is process-driven, rooted in material investigation and concerned with the language of abstraction. Her work takes many forms: sculpture, drawing, text-based work, printmaking, writing and artist's books.

Watkins' work has been exhibited nationally. She has received grants from Oregon Arts Commission, The Ford Family Foundation, Regional Arts & Culture Council, and has been awarded residencies at c3:initiaive, Caldera, Sitka Center for Art & Ecology and Oregon College of Art and Craft. Watkins holds an MFA from the Rhode Island School of Design, and is represented by PDX CONTEMPORARY ART.